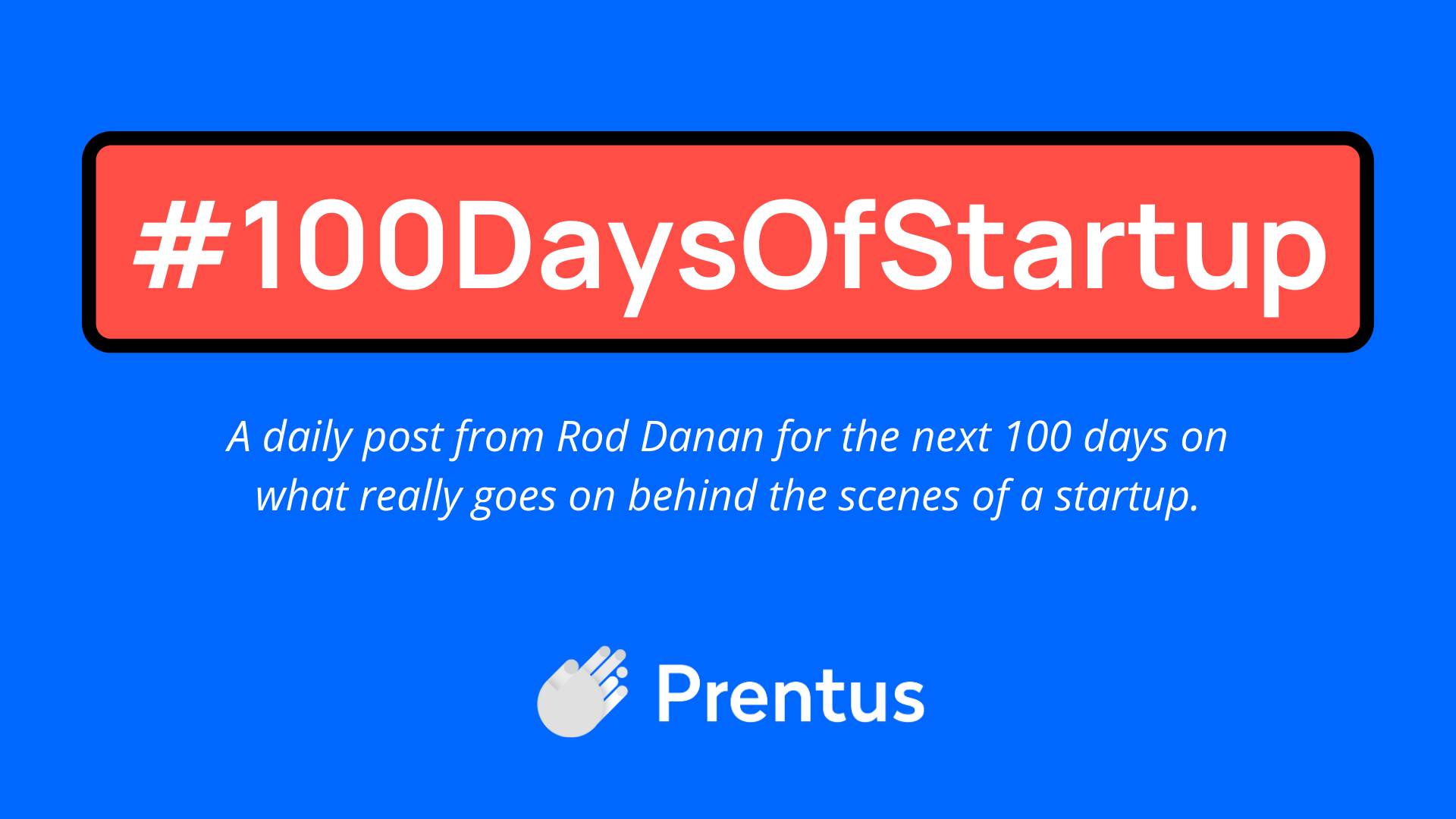 Prentus has built somewhat of a product, has a community going, and even made some money. So why am I doing #100daysofstartup?

It's a combination of different forces coming together at the same time.

There's the typical startup cycle where you go through the "trough of sorrow" (it's a thing) which I'm in right now. There's the disconnected part of COVID mixed with being a solo founder that has caused some isolation feeling. And most recently, there is the YC Build Sprint which I signed up for and needs me to log progress anyways.

What better way than to do it like my developer friends do and kickoff #100DaysOfStartup? As part of it, I will be doing a soft reboot of Prentus. This means going back to the early days of research, building, and planning.

Each day, I will write about what I did the previous day, what I'm doing that day, and how I'm feeling. When I fail, you will hear about it. When I win, you'll hear about it. And when I am inevitably having a confusing day, this will be my sounding board.

The goal at the end of the 100 days (which will be November 24th) is a finished platform that people actually use, a repeatable sales process, and a bustling community of bootcamp grads. If you have wondered what it is like trying to find a fit for a product in the market, then this will show you that first-hand.

Since I'm not starting from scratch, it would probably be best to give you a current state of affairs.

As of today, Prentus has had 11 internships paid for. One company paid for two but after the first intern was placed and said their mentor wasn't answering for over 48 hours, we canceled those two internships and refunded the money. Another company just didn't have a mentor that was senior enough so nobody wanted to intern for them. And the most recent cancellation was another two-intern company that canceled after two weeks because their interns did not know their project's languages (even though they knew that from the start).

That leaves us with 6 active internships currently. For those, there has been nothing but good news in terms of how driven each of the bootcamp grads is. In all but one company, all the interns feel that they are getting great mentorship. The longest internship is now starting day 70 out of 90 so haven't been able to report on results or full-on testimonials yet.

Using feedback from these internships along with my experience manually fulfilling them, I have been slowly building a platform on Bubble that will make everything much easier for both sides. It's about 80% done but I want to do more research and testing before officially releasing it.

Aside from the main business, there has been the community side of things where we have 165 bootcamp grads in our Discord server. There have been two group projects that started so far. Each group is a mix of developers, designers, data scientists, and product managers that is working on building a viable business in a 2-3 month timeframe.

The latest project on the community side is the Mentor Matching Project where we are aiming to pair bootcamp grads with a mentor using a custom-built tool (by our members of course). That is still in the early stages and we are collecting research here.

Part of the community is the events side of things where I am looking to build content around the bootcamp space. From bootcamp alumni working in the industry to other leaders that can provide insight, the hope is to provide value to the community. We do these on the Prentus YouTube channel live but plan to also get a podcast launched over the next few weeks. DM me if you got a name idea.

Starting tomorrow, I'll be posting a video along with its transcript where I talk about what I did that day. For today though, it's some good old-fashioned words.

The early part of the day was spent on writing the words above and figuring out how best to distribute the #100DaysOfStartups updates. Decided to keep it to one LinkedIn post a week and daily Twitter updates with a quick summary. For the real stuff, it will be posted here. Every single day by 10PM EST.

To make it quicker and more authentic, I'll be using an app called Descript to record my videos and then convert to a readable transcript. Videos will be uploaded to YouTube and embedded here. More details have to be sorted out there tomorrow.

Had a talk with a UX Design bootcamp grad named Courtney Fahlin who shared my disdain for lack of developer-designer collaboration at bootcamps. Look out for some news later this week as we seek to build a tool to simplify group projects among bootcamp grads. We already have two going in our community but the goal is to get them moving faster and with more structure.

I ended up spending a lot of the day looking into fixing my streaming issues since my interview yesterday with Brian Schermerhorn had some performance issues. Got some upgraded CAT7 ethernet cables which will let me connect directly to my router for some blazinggg fast internet.

Plus, I decided I will be using Restream since inviting guests is much easier. Previously, guests had to talk to a blank video meeting due to my setup with OBS (the open-source streaming software) which must be weird. My computer was getting killed since I was simultaneously on a video call, uploading a stream, and streaming from the YouTube Live dashboard.

The most important part of my day came after dinner when I made edits to the home page. I closed off the platform, stripped down the landing page to the bare minimum, and added a simple email signup form. It's a work in progress but I'll add some more edits tomorrow morning when my brain is fresh.

The main goal for this week is not sign-ups though. It's user research which I will start going hard on tomorrow afternoon. I'll be utilizing the email template from the book The Mom Test to reach out to what I believe is my target customer: CTOs at early tech startups that have between 10-50 employees and just raised their Seed or Series A round of funding.

My friend, Guy Magzianov, will be helping out with the user research and a whole bunch of other things at Prentus. He's finishing up the UX/UI Design program at Thinkful which means I get the honor of being his final project.

From this, I will find out what are their number one pains and figure out if the way Prentus is currently constructed is the best way to alleviate that pain. If not, well I have 99 days of startup left to share how I'm going to fix it.

Stay on top of each day of #100daysofstartup

Thank you for subscribing. You're in!

Stay on top of each day of #100daysofstartup

Thank you for subscribing. You're in!